Cohiba has been around since 1968, but the people involved in its creation have been rolling the best cigars for several years prior.

Eduardo Ribera, a Cuban roller for one of Fidel Castro’s bodyguards, was the one who came up with the Cohiba cigar blends.

With a history as rich as this, you can’t go wrong with this brand. That’s why if you’re an avid cigar smoker, it’s important to have the very best Cohiba cigars in your collection.

If you don’t know where to begin, we’ll list the best ones below. 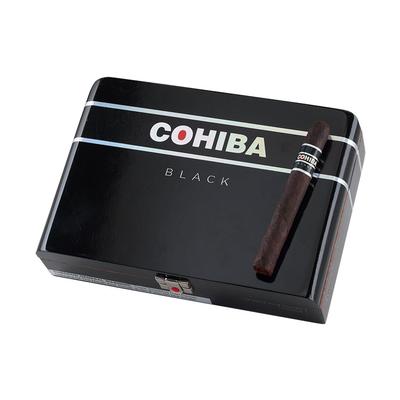 The Black Corona is a medium-strength cigar about five and 1/2 inches long with a ring size of 42/64.

The wrapper leaf used is Broadleaf, which came from Connecticut. However, the cigar itself, along with the binder and filler, is processed in the Dominican Republic.

The first thing you’ll notice about this cigar is its appearance.

The dark wrapper gives it a premium look, but you’d be surprised that it’s the actual color of the leaf, which means it wasn’t dyed.

You may notice a few veins here and there, but the dark shade of the wrapper camouflages almost all of them.

The tobacco is packed tightly and firmly inside the wrapper. Plus, you can immediately smell the minty chocolate aroma of the cigar after removing the cellophane.

The appearance of the burn is quite mesmerizing, especially since the white ash burn contrasts the dark wrapper perfectly.

It burns for about an hour and 30 minutes and produces thick smoke even when you’re not puffing it, which is something not all smokers enjoy.

The flavor is pretty heavy, combining the flavor profiles of espresso and dark chocolate.

There might be some hints of sweetness and nuts, but the rich earthy flavor overpowers them until the second third.

By the time you reach the final third, you’d find that the coffee flavors take the spotlight.

All throughout, the thickness of the smoke remains consistent, giving you a full-mouth feel with every puff.

Get Now On Famous Smoke!

The Nicaragua N5 is a Robusto-shaped, full-strength cigar with a length of five and 1/4 inches and a ring size of 54/64.

The wrapper leaf came from Honduras, called Corojo. The filler, binder, and cigar are processed in Nicaragua.

Like the Black Corona, you may notice a few veins here and there, but none of them are bulging or too big to be a bother.

Unlike other Cohiba cigars, this one is hand-rolled, so you can expect unmatched quality.

Despite the firmness of the cigar, it’s relatively easy to cut, especially if you have the best and most reliable cigar cutter out there.

Right out of the box, you will smell the aroma of chocolate, espresso, red pepper, and malt.

You can also easily figure out that part of the cigar-making process of the Nicaragua N5 involved fruit preserves, nuts, and raisins.

These aromas battle to take the spotlight but do so harmoniously. They are also the first things you’ll notice during the first third of this cigar.

Despite being an old-school, classic cigar, you will immediately notice the craftsmanship that went into blending it.

It produces a thick smoke, and it burns for an hour and a half, maybe even two hours.

By the time you reach the second third, the creaminess of the cigar starts to join the balance of the flavors.

As you get closer to the nub, the flavor will grow in intensity. Still, not one of the plethora of flavors overpowers another.

Overall, the Nicaragua N5 is a cigar that can hold its own against countless other premium cigars on the market.

Get Now On Famous Smoke! 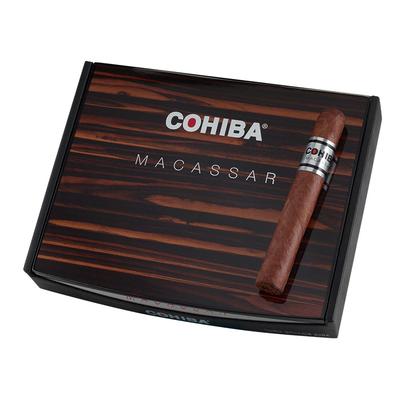 The Macassar Toro Grande is a medium-strength cigar about six inches long with a ring size of 54/64.

The wrapper leaf is Habano, which came from Connecticut, while the binder, filler, and cigar are processed in the Dominican Republic.

This cigar was the replacement for the discontinued Cohiba Comador. Why is it marketed as an ultra-premium cigar?

The blend of the Macassar came from the Comador but with a few improvements.

For instance, the tobaccos used were aged for at least four years in a rum barrel. The binder took a longer aging process, which lasted for about six years.

The cold draw hints at a blend of cedar, wood, and cocoa powder, which are also the first flavors you’d taste after lighting it.

The flavor then switches to a more dominant cocoa powder taste. The tobacco and cedar flavors follow through upon reaching the second third.

The firm construction of the Macassar keeps the burn path straight, avoiding the inconsistency of flavors.

Additionally, it causes the cigar flavor to intensify as you get closer to the nub.

You will reach its full potential as you smoke the final third, turning into an almost full-strength cigar.

While it’s not as complex as other cigars, it does capture the hearts of enthusiasts and smokers who love classic and old-school cigars.

Overall, the Macassar Toro Grande is a well-constructed and well-blended cigar. 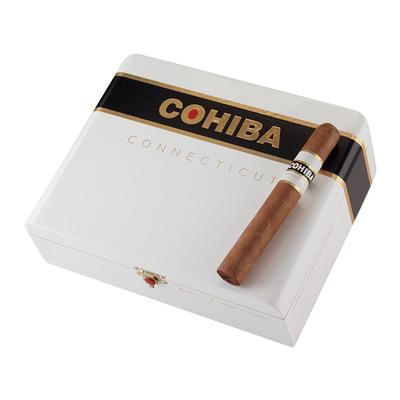 The Connecticut Robusto is a medium-strength cigar about five and 1/2 inches long with a ring size of 50/64.

The wrapper leaf is called Connecticut Shade, which came from Ecuador. The cigar is processed in the Dominican Republic.

The first thing you’ll notice about this cigar is that it has barely visible veins, thanks to the Connecticut Shade wrapper.

Aside from the aesthetics, the high-quality leaf wrapper also helps maximize the flavor of the binder and the filler.

The filler comprises Mata Fina from Brazil and Piloto Cubano from the Dominican Republic, which both add complexity to the cigar.

Additionally, Jalapa leaves from Nicaragua are also added to the filler to make the cigar stronger.

Lastly, the Olor leaf from the Dominican Republic helps add depth to the cigar.

The Connecticut Robusto uses San Andres leaves from Mexico to ensure that the cigar burns properly.

On top of premium combustibility, it also adds hints of spice and sweetness to the cigar and gives it a rich aroma.

The cigar starts with a light, creamy, and sweet flavor before the woody and grassy taste starts creeping in.

As you get to the halfway point of the cigar, you’d eventually get a pepper taste. It then ends with a cedar and earthy flavor when you get close to the nub.

All in all, the various leaves used in the construction of this cigar make the Connecticut Robusto deserving of a spot on this list.

There’s no doubt that a different level of craftsmanship went into creating and blending this cigar. 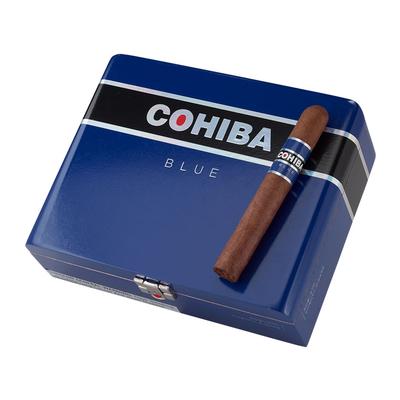 The Blue Robusto is a medium-strength cigar about five and 1/2 inches long with a ring size of 50/64.

The wrapper leaf is called Olancho San Agustin, which came from Honduras. However, the cigar is processed in the Dominican Republic.

During your first draw, you’ll taste the Blue Robusto’s creamy and earthy flavors with notes of white pepper and cedar.

As you can imagine, this gives the cigar a fine balance of spice and sweetness. At the halfway mark, the cedar and pepper notes get stronger and remain dominant up until the nub.

The Blue Robusto is firmly packed despite not being hand-rolled, resulting in a straight burn path.

However, it is sometimes too firm that it might require some effort to draw.

Nonetheless, the Blue Robusto is still a great option for regular cigar smokers looking for a budget-friendly cigar.

You may also want to invest in the best cigar humidor to guarantee the best storage for them.

Of the five, which do you think is the best Cohiba cigar? Judging from experience, we can confidently say that the Black Corona tops this list.

Its dark chocolate + coffee flavors and thick smoke help ensure that you get your money’s worth with every puff.

On the other hand, the premium features and the craftsmanship that went into the production of the Nicaragua N5 are also worth noting.

In fact, we can assure you that all of the cigars from Cohiba are of top quality. So, don’t hesitate to try all of them and let us know which one you think is the best!