As cigars grow old or are stored improperly, they start showing signs of that same aging process. One of the most common conversations in the cigar world is one of cigar plume vs mold. The reason for that is because beginners often have a hard time telling them apart.

But what exactly is cigar plume and cigar mold, and which is good for the cigar? In this article, I will try to answer all of your questions on that topic and give you a few extra tips on how to handle mold when you find it in your humidor!

To find the ideal storage options for your cigars, visit my guide on the best cigar humidors for this year. Now, let’s start with the most important questions here…

What is cigar plume (or bloom)?

While a typical cigar inspection will actively look for moldy spots, people will almost never take cigar plume as a bad sign. “Why”, you ask? Because plume (or bloom) is good for your cigars! Plume is the result of the crystallizing process of the essential oils found in the cigar’s wrapper (and sometimes the filler). Wrappers made out of more oily tobacco leaves will develop more plume faster as opposed to ones that are made out of drier sorts.

Plume comes in a lot of forms mainly due to its nature. Most commonly, however, it looks like a crystalized white-specced dust on the surface of your cigar that can easily be brushed off. Other forms of cigar plume can look grey, yellow-ish, or even black.

As a whole, things boil down to taste. And if somebody offers me the same two cigars – one lacking plume and the other covered by it, I will always choose the bloomed one. That is because it will have a more refined, aged taste, as opposed to the newer and more shallow-tasting one.

What is cigar mold?

When using any of the methods to tell if a cigar has gone bad, one of the main things you will be looking for is cigar mold. Mold develops on cigars when they’ve been kept in improper conditions. One major contributing factor to the development of mold is humidity. High temperatures make things even easier for mold to grow rapidly across all the cigars in your humidor. In its essence, mold is a specific fungus that grows on top of different surfaces.

The main differentiating factor between cigar bloom and cigar mold is that mold is almost always three-dimensional while bloom is like a flat layer of dust. The three-dimensional structure of mold comes from the growth of the fungi or bacterial colonies, which spread in all directions. Colors-wise, mold can have plenty of colors, some of which pretty vibrant. Plume, as I already mentioned, takes milder colors like white or grey.

To tackle mold before it even develops, you should first look for a good cigar humidor. One favorite humidor of mine that properly prevents cigar mold and keeps your cigars from going bad is the Quality Importers Deauville 100 Cigar Humidor.

Differences between cigar plume and mold

Even though we’ve already mentioned them a few times, let’s sum up some of the most important differences between the two. That way you will be able to easily distinguish them and figure out what to do if you see a cigar with either of the two signs…

With these things in mind, you should now be able to distinguish mold from plume. The only thing that is left for us to talk about is what to do when you spot mold around or on your cigars…

How to deal with mold on your cigars 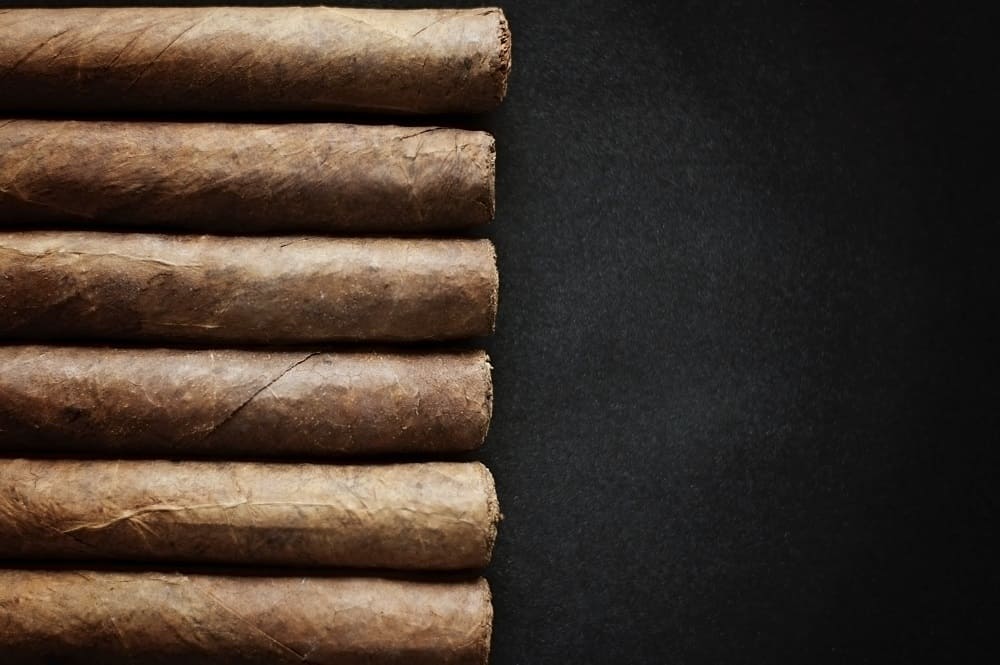 The very first thing you have to do if you notice mold on any of your cigars inside the humidor is to separate them from the rest. Mold spreads like wildfire, especially in humidors that already have good conditions for mold growth (exceeding humidity and temperature). Next up, check for more mold inside your humidor. If you see even one white spot, then you must take all the cigars out and clean the humidor thoroughly.

Isopropyl alcohol is great against mold as alcohol kills most fungi and bacteria. The downside to all that is that it might stain your humidor walls. If it was simply bloom, then there would be no staining, but if the humidor is left stained after you clean it with alcohol that is an additional telltale sign of mold.

Leaving the cigars away from the humidor for 1-2 days is also a good way to halt the spread of it. Some people even to go certain extremes like putting the cigars (and even the humidor) in a freezer for a day. I do not recommend doing that as it might ruin the cigars and also mix their flavors and scents with the ones in your freezer.

Is it okay to smoke a moldy cigar?

Contrary to what most people will tell you, cigars with mold on them are okay to smoke. The only thing you have to look at is the color of the mold. If it is white and hasn’t spread too much around the cigar, then it is okay. If it is green or blue in color, however, throw that cigar away.

Almost all cigars that have gone bad have a stale taste to them and will leave an aftertaste of dirt or soil.

At what humidity does mold grow on cigars?

Mold prefers a humid and warm environment. If your humidor exceeds 75% humidity it will greatly increase the chances of all of your cigars going bad. Granted, they won’t all develop mold at the same time but it will definitely speed up the process. Temperatures above 80 degrees also help speed up mold growth, so make sure your humidor is both cooled and balanced in humidity.

If you’re looking for a good cigar humidor cooler I recommend checking out my full buyer’s guide on that topic!

The question of cigar plume vs mold is as old as cigars are. People have been dealing with both of these phenomena for centuries and learning how to tell them from one another is a basic cigar knowledge to have. As a rule of thumb, the plume is good for cigars and won’t harm you in any way while the mold is also relatively harmless if white but potentially bad if blue or green. Both can be wiped or cleaned off your cigars or humidor but mold might leave permanent stains as it grows into the different surfaces and discolors them in the process.