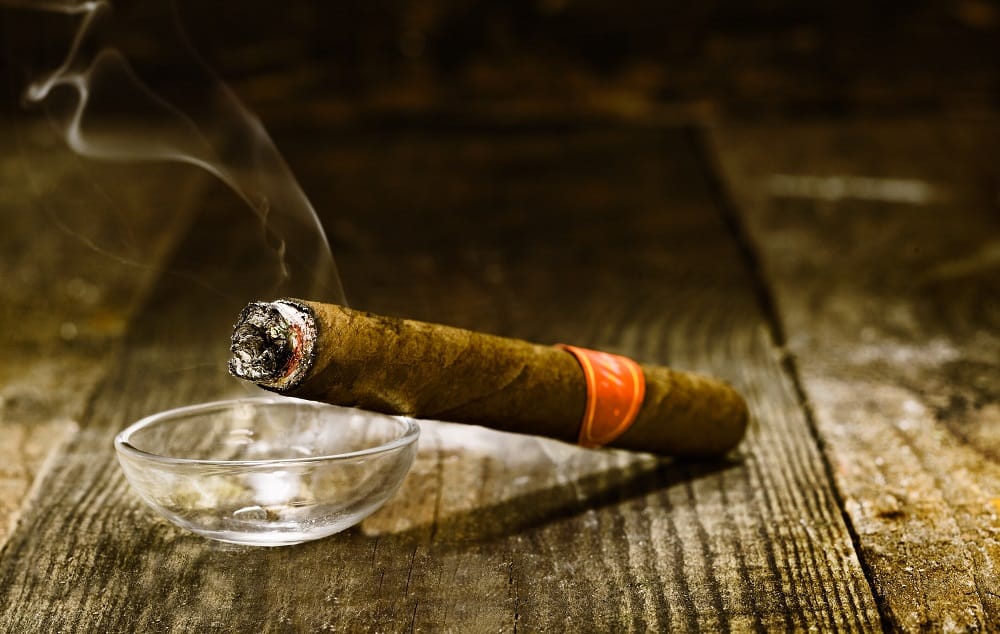 The beginner has so much to learn about cigar smoking, such as how far down should a cigar be smoked, how to light one correctly, and even the right and wrong way to ash it. In many cases, it’s really a matter of personal preference, but if you’re a beginner, then you may be worried about embarrassing yourself in public, or you may simply want to avoid some common mistakes that clearly show you’re new to smoking. So, in this article, will go over how far down you can smoke your stogie, and why.

Learning how to cut your cigar with a good cigar cutter is tricky enough, but now you have to learn the rules behind how far down your cigar can be smoked and when to toss it. For beginners, learning about cigar etiquette can be a challenge, and it can also be very confusing since not everyone shares the same opinion concerning how to smoke, ash, or extinguish a cigar.

Some cigar smokers will avoid smoking more than half a cigar before they put it out and toss it. But most smokers can agree that this is very wasteful, especially if you smoke high-priced blends.

When you’re smoking, when to toss your cigar is your decision. If you’re not certain when to put your smoke out, then simply stop smoking once the flavor changes or the cigar itself is no longer enjoyable.

Below, you’ll find some of the common reasons that indicate you should put your cigar out:

The cigar is not comfortable to hold: If you’ve smoked your cigar down to a tiny nub and it’s difficult and uncomfortable to hold, then put it out. There isn’t a filter at the end of cigars like there is on the end of a cigarette, so you can easily burn your mouth if you continue to smoke a cigar until it’s down to an inch or two from your mouth.

If you still want to continue smoking your cigar at this size, then you can purchase a roach clip or a cigar holder, both of which will allow you to get the most out of your cigar.

Upset stomach: A cigar can make you feel nauseous, lightheaded, or generally unwell. This can occur for many different reasons. However, the beginner may commonly experience this when they’re new to cigar smoking and have smoked too much or they have chosen a cigar that’s too strong. If you begin to feel unwell, put the cigar out.

Change in flavor: As I mentioned earlier, the flavor can change as you smoke closer to the end of the cigar. Once you reach closer to the end of the cigar it can begin to taste less enjoyable, it may feel too hot, or you may notice that the flavor has become very bitter. You can choose to put your cigar out or you can try purging it and continue to smoke. When you first light up a cigar you’re burning off any unwanted flavor from the lighter or match, as the flavor of the cigar begins to develop. The middle part of a cigar seems to offer the best flavor. When you start getting close to the end of the cigar, you may start to taste unwanted flavors which are usually caused by the buildup of tar and oil from the tobacco. This is where you’ll want to put the cigar out or purge it. In order to purge it, you can blow gently through the cigar, instead of puffing on it. This will usually help to clear it out and remove some of the bitterness that has built up. If you don’t notice any improvement in the flavor, then put it out and toss it.

When to Toss it

How long a cigar will last can vary from brand to brand. When you’re smoking a cigar, you don’t want to throw half a cigar away, just based on etiquette, although there are some people who will do exactly this. For most of us, we want to get the most out of our cigar and we don’t want to waste our hard-earned money by smoking just half a cigar are throwing it away too soon. In the end, it really comes down to personal preference, whether you want to smoke it down to the nub or you can afford to throw out half a premium cigar.

With cigar smoking, it always comes down to personal preference. So, in terms of putting out a cigar based on length, this will vary based on the smoker, the brand, the type of cigar, and of course, the experience of the smoker.

So, there are clearly no hard or fast rules when it comes to extinguishing your cigar based on how long it is, but you can use common sense.

A cigar can begin to get very hot way before you reach the nub, and these are usually the cigars that you’ll want to toss out early since you can end up burning your mouth if it burns down too low. But there are other cigars that will taste amazing, right down to the last puff, and those are the ones that are worth smoking down to the nub. So, basically, how far down should you smoke a cigar will be a matter of personal preference and will also depend on the type of cigar you’re smoking.