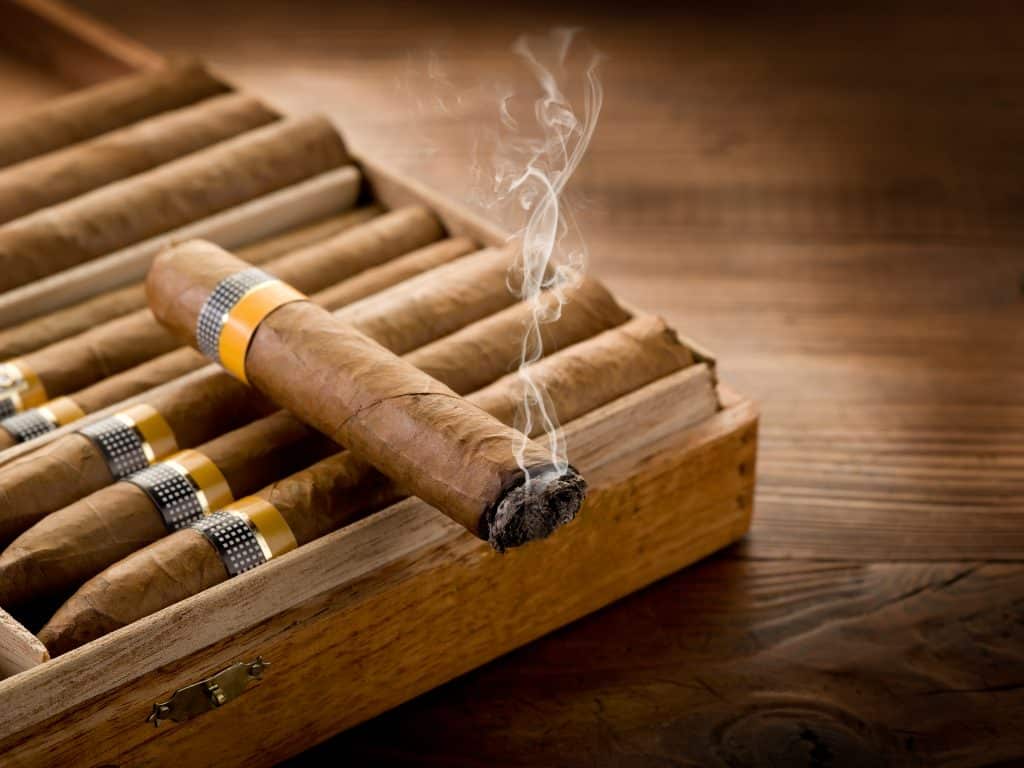 The beginner will have somewhat of a challenge when they first start smoking. They may not know what type of cigar to choose, how to pick out the right cigar, or even how to smoke one. Many beginners tend to make the mistake of inhaling, which is a big no-no. When it comes to smoking a cigar, overdoing it is a thing. Not only can it leave the newbie’s throat sore, but it can cause nausea, headaches, and an upset stomach. So, how many cigars can you smoke a day without getting sick? Let’s find out.

What is Cigar Sickness?

This is an issue that many beginners will struggle with at some point or another.

For an experienced smoker, cigar sickness is rare, but for the beginner, it can be all too real. Cigar sickness is a type of condition that’s been attributed to going too hard too quickly. A new smoker can reduce their chances of getting sick by following the guidelines that I’ve included here.

Regardless of cigar shapes and sizes, all contain nicotine and other substances. Machine-made cigars will also contain preservatives. If you happen to be lucky enough to smoke a cigar that’s handmade, you won’t have to worry about getting sick, since these cigars tend to contain only one hundred percent tobacco, and no harmful chemical additives. However, if the tobacco has not been organically grown, then it’s still possible that it contains the residue from pesticides, which have not dissipated if the cigar was not given enough time to age before it was distributed. In order to reduce your chances of getting sick, you should avoid cigars that are machine-made and ensure that the low-priced handmade cigars you’re smoking have had time to cure. You can age your cigars yourself if you have the best cigar humidor coolers, one that can keep the cigar at the perfect humidity level, preventing mold growth.

What to Do to Avoid Getting Sick

A beginner may try to smoke a large gauge cigar their first time around, but they may soon start to feel dizzy, begin to sweat and feel a little nauseous. If this happens to you when you’re smoking, then you need to put that cigar out immediately. Once the cigar has been extinguished, eat something sweet and drink some water. You can place a sugar cube in your mouth since pure sugar tends to work best, however, you can also try eating some candy. Relaxing will also help, but you won’t feel better until you eat something.

After this has happened to you, you may want to reconsider avoiding smoking the same type of cigar in the future, at least until you become used to cigar life. Cigar sickness isn’t a reason to give up this hobby, but you do need to pace yourself in terms of how much you smoke and how often. 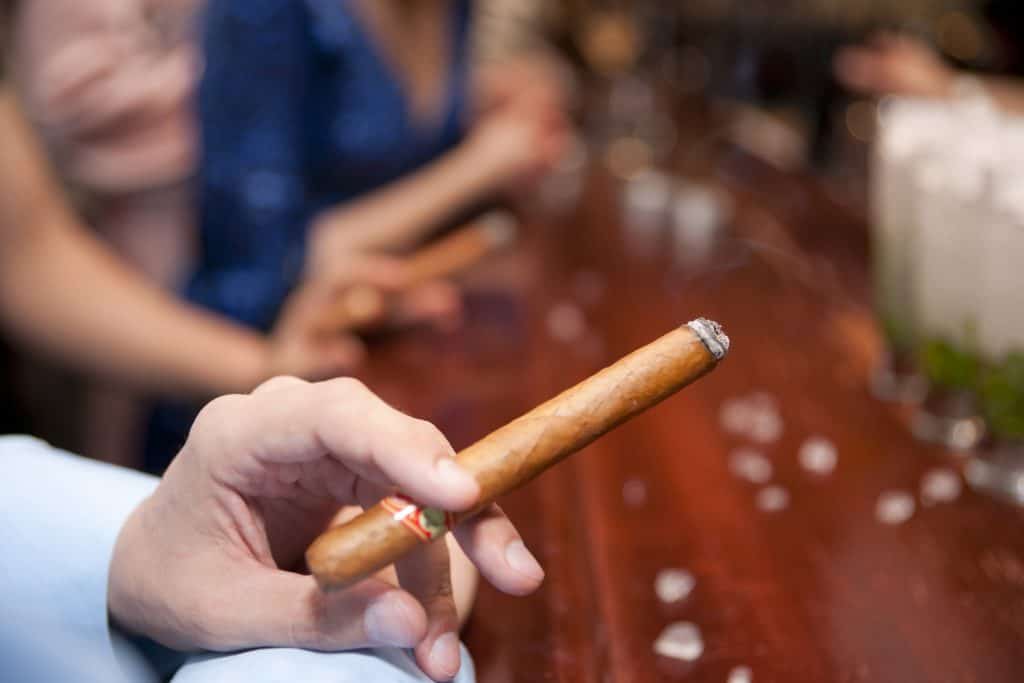 The big reason that beginners tend to fall ill at some point when they first start smoking is that they inhale the smoke like they would with a cigarette. This is not how you’re supposed to smoke a cigar. Instead of inhaling, you need to puff on the cigar, allow the smoke to roll around in your mouth and then blow the smoke out. Never swallow or inhale the smoke.

You should also avoid smoking the cigar too quickly. Only puff on the cigar a couple of times per minute. Avoid drawing too hard on the cigar. If it’s partially plugged or packed too tightly, then put it out and try another cigar.

Avoid smoking strong cigars. Milder cigars are more affordable, and since you’re a beginner, you need to learn to crawl before you can walk. A beginner should choose a mild to medium blend.

Eating before you smoke can also minimize the chances of you getting sick. So can drinking water or another type of beverage while you smoke. Drinking one of your favorite beverages while you smoke can be a great way to enhance the flavor of the cigar. Try drinking a good scotch or even a nice cup of hot coffee.

Many beginners report feeling sick from smoking. One minute, everything feels fine and all of a sudden it hits you. You feel nauseous, your skin feels clammy, and you feel pretty dizzy. For some, it can be so bad that vomiting will occur. Just like with alcohol, the beginner will need to pace themselves in order to avoid getting sick their first time around. As a newbie, you should only smoke one cigar a day. An experienced smoker can easily smoke three or four cigars a day. If you’re new to smoking, choose a thinner, shorter cigar. At first, you may only be able to smoke half of it comfortably, to avoid any symptoms associated with cigar sickness. This is perfectly fine. You can extinguish the cigar and smoke the rest later. But in the beginning, avoid smoking more than one daily.

Why Beginners Get Sick

It’s true that some cigars will contain chemical preservatives or there may be some residual pesticides that are to blame for cigar sickness. As I mentioned earlier, allowing your cigars to age for a month or two can help to reduce the chemical content. However, aside from chemical content, there are other reasons why beginners often get sick when they first smoke up. You just can’t smoke a cigar the same way you can smoke a cigarette. A cigar is much stronger. Many larger cigars can contain as much tobacco as an entire pack of cigarettes. This also means it will have a significantly higher nicotine content.

But unlike a cigarette, you don’t have to inhale to get your nicotine fix. Instead, the nicotine will be absorbed in the membranes in your mouth. This is why you’re not supposed to inhale. Instead, the smoke should roll around in your mouth, before you gently blow it out. Most cigar enthusiasts that are ex cigarette smokers will mistakenly believe that inhaling is the only way they can get their daily dose of nicotine, but as you can see here, that’s simply not true.

If you inhale the smoke, you’re going to get sick at some point. In fact, if you overdo it, there’s a good chance you may feel sick the next morning as well. When you’re smoking, think of the cigar as a large drink that you’re just taking a small sip from. Keep the smoke in your mouth, don’t swallow it. You’re only going to puff on the cigar, allowing the smoke to flow out of your mouth.

If you wake up the following morning and you’re still feeling sick, a cup of coffee with sugar and a large meal will often be enough to do the trick. You should also abstain from smoking that day, to avoid making matters worse.

If you’re a beginner, as I mentioned earlier, the goal is to go slow. Choose a mild cigar blend and smoke only half of it at a time. Avoid smoking more than one cigar a day for the first two months. If you’re an experienced smoker, then you already know what you’re doing and how many cigars you can handle. Most experienced smokers will rarely get sick unless they try out a new, stronger cigar, in which case, only smoke half of the cigar at a time to avoid feeling sick. Learning how to pace yourself and choose a mild to medium blend cigar will be the keys to avoiding cigar sickness or a cigar hangover the next day. If you’re not sure how to choose a milder blend, speak with friends who have experience or talk to the staff at the smoke shop for product recommendations. Remember, buy a humidor to allow your cigars to continue to age safely, pace yourself, and eat before you smoke.

So, how many cigars can you smoke in a day? This ultimately depends on whether you’re a beginner or an experienced smoker. As a beginner, you’ll want to stick to just smoking one cigar a day, until your body adjusts to smoking. Smoke only half a cigar at a time, putting it out and saving half for later. This will help you to avoid many of the common symptoms that tend to plague new smokers in the beginning, such as nausea and headaches. Over the course of several weeks, you’ll find that you’re able to smoke an entire cigar in one sitting, which is more ideal since relighting an old cigar doesn’t taste quite as good as lighting up a fresh one. The experienced smoker will already know what they can handle, but for health reasons, I recommend sticking with two cigars a day.