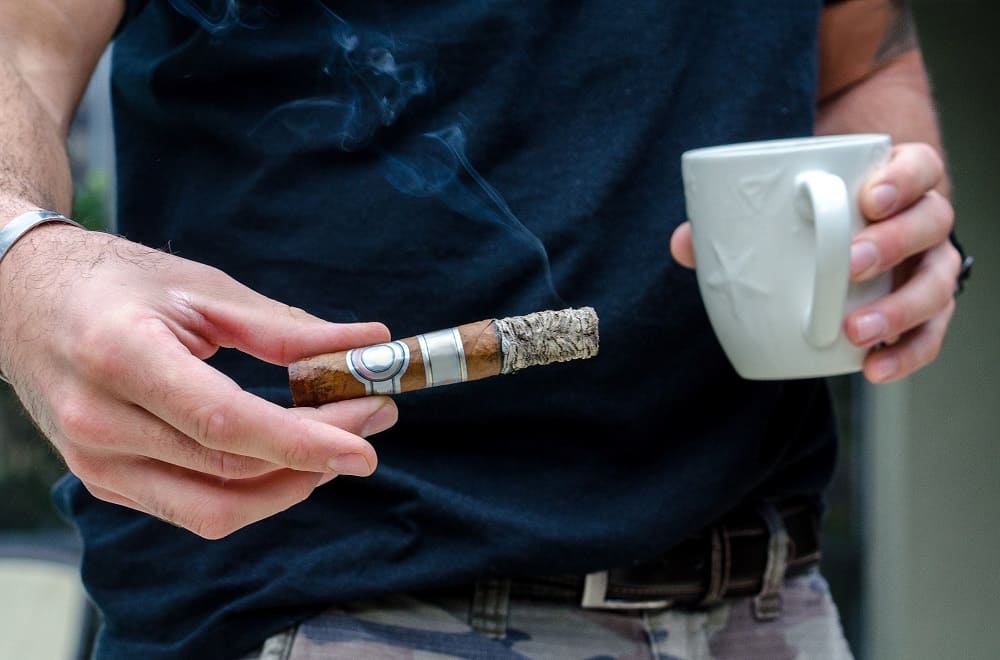 When you’re smoking a cigar, you don’t have to constantly flick or tap on the ash like you would if you were smoking a cigarette. A handmade cigar is made out of long-filler tobacco. This type of tobacco holds a sturdier longer ash compared to a cigarette. But if you were a long-time cigarette smoker, then the odds are you don’t know how to ash a cigar and prevent breaking the ember, causing you to have to relight your cigar repeatedly. There’s definitely a right and wrong way to ash a cigar. Learning how to do it the right way will keep your cigar well-lit and will prevent you from getting ashes everywhere.

A cigar’s ash is much different compared to cigarette ash, which tends to flake and ends up in your lap if you don’t constantly ash the end of it. But with a cigar, if you mess with the ash too much or if you use too much force then you’ll end up breaking off the cigar’s cherry, so you’ll need to relight it. When you’re smoking a cigar, you need to have patience. Instead of constantly flicking the ash, wait until it’s reached approximately one inch in length, or until you notice a crack has started to develop. On the other hand, if you wait too long then the ash is going to drop in your lap and onto the floor.

You’ll also need to use the best cigar ashtray. These ashtrays are designed to contain a higher volume of ashes and feature rests that are designed to support the width of a cigar. You can’t use an ashtray that’s designed for cigarettes since the rests are very thin and cannot hold a cigar.

When you smoking a cigar and you have to wait a long time to ash, try placing the cigar against the side of the ashtray, then tap the end of the cigar gently. If you’ve done it correctly, and at the right time, the cigar’s weight will allow the ash to fall off naturally. If the ash won’t break off, then place the cigar on the side of the ashtray for a few seconds and then repeat the process.

Another option is to press gently on the edge of the cigar, placing it up against the side of the ashtray, then rotate or turn the cigar at the same time. Make sure you don’t use too much force. This technique will allow the ash to evenly break off, so you can avoid any of the issues mentioned above.

The Importance of Properly Ashing

When you think about it, a cigar’s ash may seem pretty insignificant, when it comes to the aspect of smoking, but overlooking the proper way to ash can end up being a huge mistake since the ash can quickly end up everywhere. Additionally, the act of ashing shouldn’t be taken lightly, since when done correctly, you’re exercising proper cigar etiquette. Ashing the wrong way can be embarrassing and can show your fellow smokers that you’re new to cigar life. It can also have an impact on your smoking experience and the overall taste of the cigar.

In terms of color, the ash should be white, ideally. The color of the ash reflects the large deposits of the calcium content in the soil that the crop of tobacco was grown in. At times, the ash may even be a light shade of gray with some streaks of white, which is also ideal. Dark ash is not desirable, especially dark gray or black ash. This can tell you that there were fewer minerals in the soil, which tends to produce a more acidic, less pleasurable partially burnt scent and flavor. However, there are some exceptions. Cuban soil often contains a higher level of magnesium, which often results in darker ash.

As I mentioned earlier, the ash should extend approximately one inch beyond the cherry. This one inch of ash works to provide a buffer of sorts around the end of the cigar, controlling the airflow around the cigar’s cherry and keeps the cigar burning steady, slow, and cooler. A cigar that has no ash on the end may burn too hot, which can negatively impact the smoke. Because of this, it’s important that you find the right balance between too much ash and no ash hanging off the end at all.

The size of the ashtray you use should depend on the ring gauge size of the cigars you commonly smoke. If you smoke cigarillos, you can get away with using a standard cigarette ashtray. But bigger ring gauge cigars will require the use of a dedicated cigar ashtray, since it will have rests that you can use to set your cigar down on and prevent the cigar itself from getting covered in ash. I recommend using the Big Easy Ashtray. This model comes with plenty of rests, so you and your friends can share the same ashtray, kick back, and enjoy a good smoke.

Learning how to ash a cigar the right way will keep the cigar well-lit, can enhance your smoking experience, can prevent the cigar from burning too hot and can ensure the cigar offers the type of flavor and aroma it should. The best way to ash a cigar is to gently roll the cigar in the ashtray, which will allow you to maintain about an inch of ash on the end, in a cone shape. However, the exact length and shape of the ash can often be dependent on the type of cigar you’re smoking. Some cigars will need to retain more ash than others. Often, it’s the thicker ring gauge cigars that you’ll need to maintain an inch of ash. If you’re not sure, ask another cigar enthusiast or speak to the staff at your local cigar lounge for tips on how to ash and how much ash to leave on the end at all times, for the best smoking experience possible.